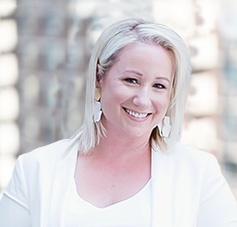 Jessica L. Mazzeo, J.D. is a co-founder of Griesing Law, LLC and is the Firm’s Chief Operating Officer. She provides a critical leadership role in all aspects of the Firm, acting as a dedicated advocate for both staff and clients.

Jessica focuses on overseeing and implementing all of the Firm’s business operations while establishing policies that promote and retain the Firm’s culture and strategic vision. Her greatest responsibilities include leading and encouraging employees to reach their fullest potential, along with ensuring delivery of exemplary service to our clients and vendors.

What do you see on the horizon?

The legal industry has consistently been stagnant in many areas when it comes change – especially in the realm of balancing employee expectations.  But the COVID-19 pandemic has forced many law firms to react in a very positive way.  Coupled with the last few years of social uprising around the country, firms are now properly focusing on employee wellbeing and contributing to the balance that employees need both at home and in the workplace.  Remote working for all employees of a firm – both attorney and staff alike – has been on the rise in the last year.  Together with increased efforts in seeking a more diverse, equitable and inclusive workplace, there is a great shift that is still to come within our industry in terms of our working environments and the types of roles within a law firm.  Luckily for our firm, we have been progressive in these areas since day one which has helped us stay ahead of the curve.

Jessica began her legal career before graduating high school where she previously held such roles as receptionist, secretary and paralegal at local area firms, including firms listed on the Am Law 100 and 200.

Since the Firm’s inception, Jessica has been a driving force in making it a one of a kind law firm, locally and nationally, that focuses on a collaborative team approach and discourages internal competition that interferes with client service. Her marketing and business development efforts have helped the firm grow its initial client base of only a small handful of clients to now having over 500 clients handling over 1,100 matters for clients which include Fortune 500 companies, small and privately held business, non-profits and entrepreneurs. Jessica has been relentless in her pursuit of building business for the Firm and has a proven track record of effectively assisting Firm attorneys in converting prospective clients into actual clients and Jessica herself has been able to attract clients to the firm. Jessica is an alumni of the Goldman Sachs 10,000 Small Businesses Program, an intensive twelve week mini-MBA program designed to help entrepreneurs create jobs and economic opportunity by providing greater access to education, capital and business support services. She also completed the Leadership Now development series presented by the Greater Philadelphia Chamber of Commerce.

Jessica was the 2020-2021 Chair of the Diversity and Inclusion Committee of the Association of Legal Administrators (“ALA”), a non-profit organization with over 8,500 members across 30 countries and was previously on the Philadelphia Chapter’s Diversity and Inclusion Committee.  Jessica also served as the Vice President of Communications, Board Secretary and on the 40th Anniversary Committee and Technology Subcommittee for the Philadelphia Chapter. In addition, she served for six years as a committee volunteer for the Women’s Business Enterprise Center (WBEC) East where she devoted several hours a month to various needs of the organization.  In September 2016, the organization awarded Jessica for her efforts by making her a recipient of its Shining Star Award.

Since 2010 when the Firm became a member of the organization, Jessica became actively involved in supporting the National Association of Minority and Women Owned Law Firms (“NAMWOLF”), which is a non-profit trade organization dedicated to promoting diversity and fostering relationships between Fortune 500 companies and outside legal counsel. Jessica has traveled across the country as a staff volunteer for NAMWOLF since 2011 including serving as a representative of the NAMWOLF team at various Women Business Enterprise National Council’s National Conferences and Business Fairs.  She also served as Co-Chair of NAMWOLF’s Marketing Initiative from 2011-2013.  Jessica played a significant role in the Firm receiving NAMWOLF’s 2013 Law Firm MVP Award which is given by in-house attorneys from Fortune 500 corporations to acknowledge the law firm that has done the most to advance the organization’s mission. This is a particularly notable accomplishment because in doing so she helped the Firm become just the second firm in the organization’s then 12 year history to receive this accolade and there are currently 138 member law firms across 37 states. The award recognizes her passion for the organization and its mission as evidenced by her efforts on its behalf.

Jessica is a graduate of both Temple University’s Fox School of Business and Widener University’s Delaware Law School.