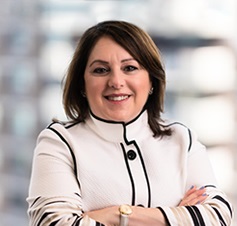 Francine Friedman Griesing is the founder and Managing Member of Griesing Law, LLC. Fran is a valued, strategic advisor to top executives and general counsel at the region’s and country’s largest corporations and institutions.

My practice focuses primarily on providing clients with a high level of expertise in defending high stakes litigation arising out of complex business transactions and handling sensitive employment matters for corporate clients through litigation and alternate dispute resolution.

What do you see on the horizon?

Clients continue to be concerned about reducing risk, managing legal expense and anticipating problems before they arise. They are looking for advisors who can solve problems practically without incurring unnecessary expense. Increasingly, boutique law firms, such as ours, are demonstrating their ability to exceed expectations in this increasingly complex world.

According to Chambers and Partners USA, a leading directory of the legal profession, clients describe Fran as “intensely detail-focused and a persuasive and energetic litigator” with a “professional and personable manner.” Chambers has also expressly recognized her for her work in the hospitality industry, and for her “practical and down-to-earth counsel.” According to Client Choice, which recognizes law firm partners around the world that stand apart for their excellent client care and quality of service, “Fran is a level-headed and highly skilled practitioner who has been invaluable in helping reach settlements and, when necessary, litigating complex commercial disputes.”

Prior to launching Griesing Law, LLC in 2010, Fran practiced law at top tier firms in New York and Philadelphia and she also served as Chair of Litigation of Philadelphia’s City Solicitor’s Office under former Mayor Edward G. Rendell, who later served as Governor of Pennsylvania. As the City’s top trial lawyer from 1997 to 2000, Fran advised the Mayor, ranking administration officials and City Council on cutting-edge legal issues, handling over 2,000 cases per year, supervising 75 lawyers plus staff, and overseeing outside counsel. Furthermore, as the City’s lead attorney on several high-profile matters, she is accustomed to working with a diverse constituency and performing under public scrutiny.

Fran has been recognized by numerous legal rankings for her expertise in commercial litigation and employment law including Chambers and Partners USA, Best Lawyers in America, Client Choice Guide USA, and Pennsylvania Super Lawyers. She has also been acknowledged as one of The Philadelphia Inquirer’s Influencers of Law Lifetime Achievers, Philadelphia Business Journal’s Best of the Bar, The Legal Intelligencer’s Women of the Year and Pennsylvania Super Lawyers’ Top 50 Women Lawyers. She has been the recipient of Ms. JD’s Sharing Her Passion Award, the Philadelphia Bar Education Center’s Excellence in Legal Education Award and the American Bar Association’s Excellence in Legal Writing Award.

In addition, Fran is highly regarded as a trailblazing entrepreneur, selected by the National Association of Women Business Owners (NAWBO) and Bank of America as the 2018 Woman Business Owner of the Year and by The Chamber of Commerce for Greater Philadelphia as the 2018 Small Business Person of the Year. She was also recognized by WBEC-East with the 2019 WBE Leadership Award. She’s been included in the American Bar Association’s Women Who Inspire Us, Women’s Enterprise Magazine‘s Top WBE CEOs, Philly Biz’s Executives of the Year, Enterprising Women Magazine’s Enterprising Women of the Year, Philadelphia Business Journal’s Women of Distinction, Business Philadelphia’s Women to Watch and one of the Governor’s Best 50 Women in Business. She is also widely recognized as an advocate for women, minorities and diverse constituencies in the legal profession and the workplace generally. In 2019, The Philadelphia Inquirer honored Fran with a Lifetime Achievement Award in Diversity & Inclusion.

Fran is a highly sought speaker and writer and is featured in “The Road to Independence, 101 Women’s Journeys to Starting Their Own Firms”, published by the American Bar Association. She has taught Business Law, Public Employment Law and Advocacy Skills at Temple University’s Beasley School of Law and Fox School of Business & Management and has been a guest lecturer at the Wharton School of the University of Pennsylvania and the Thomas Kline School of Law at Drexel University. Fran is an honors graduate of Binghamton University and the University of Pennsylvania Law School, where she was an editor of the Law Review.